The decade began with a struggle to retain members, and, as a result, a struggle to fill seats at the Church Hill Theatre. After a succession of loss-making productions that were haemorrhaging the club finances, we had to reluctantly bid farewell to the Church Hill in 1993. Changes in the layout of Broughton-McDonald Church combined with a steep rise in rent meant another goodbye - this time to our workshop and rehearsal facilities.

Our mounting problems didn't end there. Our links with the Merchant Company Schools had provided us, over the years, with storage in various school buildings, but a combination of redevelopments and new safety regulations left us with nowhere for our scenery.

So there we were; a falling membership, no venue, no rehearsal room, no scenery, no props and only as many costumes that could be kept in club members' wardrobes. Did we fold? Of course not. We rehearsed in members' houses and sought alternative venues like the Netherbow Arts Centre or the University's Bedlam. We also participated in collaborations or joint productions with other clubs. Nor were we afraid to try something new, like appearing regularly from 1997 onwards at the wonderful Arran Dramafest.

New opportunities were eagerly welcomed such as when the Edinburgh Military Tattoo invited the SCDA to provide actors to participate in historical re-enactments and a number of Mercators jumped at the chance. The 1993 Tattoo featured the crowning of Macbeth. A year later, we found ourselves in the thick of the Battle of Waterloo. It was an amateur actor's dream; a guaranteed full house of 8000 every night for three weeks and being broadcast by the BBC.

We returned to the Edinburgh Festival Fringe at a new venue, Riddles Court in the Lawnmarket, a wonderfully atmospheric 16th century building in Edinburgh's Old Town. Its only drawback was a tendency for August indoor temperatures to verge on the sub-tropical. Our early productions there were always artistically rewarding, but like many fellow Fringe performers, we often found ourselves outnumbering our audience.

Full length plays with sets were now impossible, so we found evenings of multiple plays a popular alternative. We opened our Diamond Jubilee season at Riddles Court in August 1996 with a presentation of Pinter Plus, which included four Pinter pieces plus one each from David Campton and John Bowen. We concluded that season at the Netherbow Arts Centre Theatre in May 1997 with Purely Pinter, this time with five Pinter plays or sketches. A decade that had began with a membership of around thirty ended with numbers down to single figures. Our future seemed uncertain... 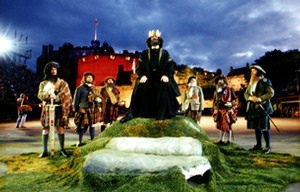 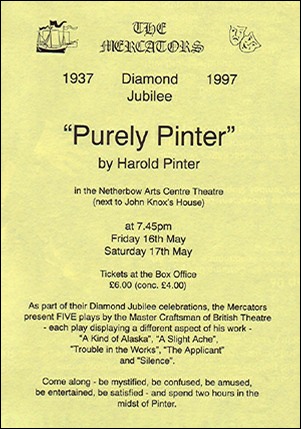 Return to Our History